In Russia homophobia reigns – as it does in most other backward countries. If we take a look at Russia, we certainly wonder why it is that so many countries, so many people are deeply homophobic. Looking at Russia we’ll soon notice the close ties that Russia’s government has with the Orthodox Church. When we then survey other homophobic countries, we’ll see all these countries are also very religious. It would be simple to conclude that religion causes homophobia.

It would also be wrong.

Homophobia is not something caused by religion. Although the Abrahamic religions are doubtlessly homophobic, they merely amplify, not cause this irrationality. The cause for homophobia is actually quite simple:

There are two unrelated but significant traits in men that fuel this fear:

Homophobic men are deathly afraid of having to live through a situation that every woman walking a street today calls ‘normal’.

But you have to believe in something!

In a nutshell that is why believers can’t wrap their thoughts around non-belief. In most believers, their faith scratches an itch, satisfies a craving that non-belief can’t. They need to believe something, no matter how preposterous. Luckily, this desire is artificial. It’s an addiction, induced by early indoctrination.

How can you live without religion,

is an honest question I was asked on multiple occasions. The problem is that these people really can’t – at least not immediately – live without religion; just like most addicts can’t live without their drugs. Weaning yourself of an addiction is painful and difficult. I remember how difficult it was for me to quit smoking – and that was a relatively easy thing to do compared to other addictions. Kicking the habit of religion took me much longer, and a lot more effort.

So, can you live without religion? You can – just like it is possible to live without nicotine, alcohol, or other drugs. But it’s a difficult process once you are addicted. It will induce great discomfort, and you are constantly surrounded by enablers who try to push you off the wagon.

So you can live without religion – if you want to.

But that requires that you first recognize that you have a problem.

As entertaining as reading the discussion on God-awful (ha ha) christian flick ‘God’s not Dead’ is, it has also revealed two strange traits. Of course, the proponents for a film like GND can be expected to be rather fervent believers, so we get a natural pre-selection of commenters on that side of the spectrum.

Firstly, the most common retort to any criticism is ‘Why do you hate god’? Yeah, right. I never said their comments were smart.

But, strangely, whenever a discussion gets anywhere, it’s interrupted by a particularly puzzling non-sequitur from a religious person: “Oh, that’s a typically liberal view” – as if that means anything. I don’t get it. Is God supposed to have a political agenda? Are politically liberal Christians not religious? Is the validity of a religious argument decided by the political views of the one who brings it up?

I know that it helps believing in authority to accept the idea of Gods, and therefore a conservative mindset (not to mention inductive reasoning) makes it more likely that you are religious. Yet, if Jesus existed as described by the Bible, he is a radical leftist: a peacenik (‘turn the other cheek’) who wants you to give your second coat to the destitute and who is against big money (money lenders, i.e. banks).

So if God did exist and took political sides, it’d be bad news for the conservatives.

Bethany Hamilton is a true hero. At age 13, while relaxing on a surfboard, a 15 feet tiger shark attacked her, severing her left arm just below the shoulder. She almost bled out before she reached the hospital where the doctors saved her life.

This week, she won the Women’s Pipeline professional surfing championship. She has shown the world that you can overcome incredible odds, trauma and even loss of limb if you are strong enough.

Unfortunately, though – although this does not diminish her achievement – she’s not strong of reason. In her book Soul Surfer she wrote that the incident was a divine inspiration and that she did not die that fateful day because God had something else in mind for her.

Bethany, the doctors saved your life, not God. And your achievements are entirely yours, not Gods. Don’t diminish yourself.

You are the inspiration.

I saw the film this evening. Was warned probably no seats left. Theatre packed. […] At the end everyone applauded! Several young men jumped up and preached loudly as credits were going by.

And that is a good thing? If she’s saying the truth – imagine you sat in a cinema, and suddenly the guy next to you jumped up, yelling ‘Allahu akbar!’ What would your first reaction be? Homeland Security or State Police?

If she’s not saying the truth – what does it say about devout believers who lie for their god?

As I wrote on Wednesday, the release of the new fantasy epos ‘Noah (Inspired by the Biblical story)’ is imminent. Like a dark cloud on the horizon, the question ‘How can any intelligent Christian watch this…’ roils on IMDB’s discussion forum.

Just grin and walk away.

How can you convincingly claim that someone is a god? Well, it seems that a couple of thousand years ago, humanity was rather unimaginative. People devised a formula, a list of buzzwords if you want, and to be a god you had to check off a laundry list of things that are impossible for humans. In a case of classic irony, the Greek even hung a lantern on this when they told the story of Herakles (Hercules) and the 12 deeds he had to accomplish to become a god. 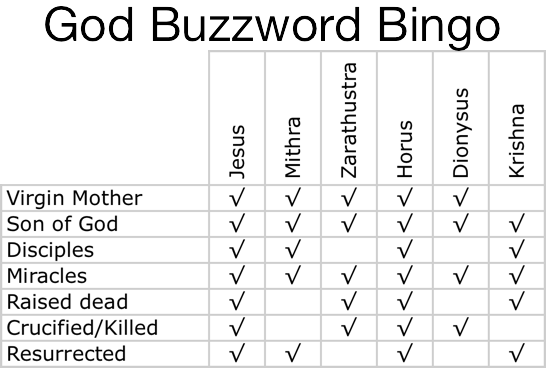 Bingo! for Jesus and Horus. Image by CF

So what were the classic ingredients to ‘prove’ that you talked a bout a god? The laundry list traditionally contained the following items:

Sound familiar? It should. After all, the following gods worshipped well before 400 BC score more than 80% on that list: Horus, Dionysus, Mithra, Zarathustra, and Krishna.

Oh, and so do the Jhonny-come-latelys, Jesus of Nazareth and Appolonius of Tyana.

Here’s a nice one to ask bible-thumpers after they quote the bejeezus out of your patience:

According to holy scripture, who is this:

He was called the son of God, born of a virgin, performed miracles, raised the dead, had disciples, was crucified, then resurrected after three days, and was worshipped 1000 BC?

The answer: indistinct. It could be both Mithra and Horus.

It could also have been Krishna – if we moved up the ‘worshipped’ date to 400 BC.

Tomorrow will see the release of “God’s not Dead”, a christian movie (based on Rice Broocks’ book with the same name). OK, so the title invokes Nietzsche – interesting. According to the blurb, the story revolves around a philosophy student who has to fight a dictatorial philosophy professor. The professor requires all students to sign a ‘God is Dead’ statement to get a passing grade, and the student strikes a bargain that he will pass if he can defend his position ‘God is Alive’.

Well, that’s quite some stereotyped cliché’d trope (pleonasms be damned); the movie itself is highly reminiscent of a 10 minute (and logically embarrassingly inept) movie I watched on YouTube some time ago (which pretty much re-told the aforementioned links).

But then, the movie is officially advertised with this tagline:

Atheists say ‘No one can prove the existence of God’. And they are right. But I say, ‘No one can disprove that God exists.’

Ouch. And this is supposed to happen in philosophy class? Is this the level of intelligence we can expect from the movie?

Now, I do understand that this movie is primarily aimed at the average american christian. But do the producers really hold their viewer’s intellect in such contempt that they lead with kindergarden logic? This is going to be one long movie to watch.

People have asked me if I was going to watch it, what with me being an atheist and all. Hell yes! Being an atheist did not prevent me from watching ‘Thor‘. Didn’t like it much – but not for theological reasons. It simply wasn’t a good movie. I suspect that I’ll much more enjoy watching Emma Watson than I did Chris Hemsworth. Oh, and Jennifer Connelly! Who would not want to see her?

Screw the story – I’ve read it. Not much to write home about. It rains more than in a french drama, and everyone dies. Ugly guy loves beautiful woman. A rainbow at the end. My godson wrote better stories in second grade.

Then again, he didn’t bring in Emma and Jennifer.