in Talking To God I quipped:

If you tell some one that you are talking to god, nobody bats an eye. Do the same while holding a phone, and they’ll put you in the looney bin.

In a recent and very friendly conversation with a believer I made the same comment, only to have her eyes light up with delight and humor. She agreed that it was funny, although she couldn’t exactly say why.

I can. For believers it’s a matter of perception. For atheists a matter of fact. The only difference between the guy talking to god, and a guy using the phone to talk to god is the phone. Yet, phones in general aren’t known as a leading cause for madness.

Anyone who claims to be talking to god has a screw loose. Phone or no phone.

I contend that believers know this. That’s why they laugh.

An article in VICE News reports that more than a hundred Muslim Scholars from around the world have made the ‘Theological Case’ against the Islamic State (IS, a.k.a. ISIS). In no uncertain words do the authors denounce IS(IS) as un-islamic.

While it is nice to finally have some muslims speak up against the horrendous atrocities committed in the name Allah, it is entirely pointless.

So a bunch of scholars have gotten together to interpret Quran and Hadith in a certain way in order to show ISIS that their interpretation is wrong. The problem is this: neither side can convincingly prove the other side is wrong – they have equal rights to claim that their interpretation is correct. Looking at the bloody history of religions Canada Phone base Number , a case can be made that the more ruthless and bloody you are, the closer you are to scripture – and that is by no means limited to Islam. Furthermore, no holy Scripture has ever been shown to be ethically sufficient to pass a modern litmus test. A millennia old code of conduct simply can’t – no matter how much parsing is involved.

What we have here, essentially, is one group of courtiers lecturing another group of aristocrats on the correct way to embroider the emperor’s new robes.

Yesterday I mentioned the incredibly misogynic posters that ultra-orthodox jews put up in Stamford Hill. Predictably, and with much credit to Sam Aldersley, the issue blew up.

Chaim Hochhauser, from Stamford Hill’s Shomrim group, tried this as an explanation:

I have spoken to the organisers of the parade – they have apologised. They did not think it would get so public. It was just a misunderstanding.

This is not a misunderstanding. There is nothing to misunderstand about misogyny. To make this perfectly clear – especially to those who maintain that the posters were only intended for religious people: misogyny is not a relative state of the mind; it is always evil. There is no excuse. If you believe that you are entitled to tell a woman which side of the road she must use, you are morally unfit for modern civilization. This is true regardless if you are religious or not.

That these people thought this wouldn’t get so public is just another disturbing reminder that political correctness in the UK is retarding efforts to rid society of institutionalized injustice.

Some people have complained that I’m dishing it out all too one-sided; that all I do is lambasting Christians, Muslims and Hindu, showing how unjust, homophobic and misogynic they are, but not telling the whole story. In short, I’m too one-sided.

My bad. I certainly did not want to make it appear as if I’m taking sides. So, without any further ado, regard this: 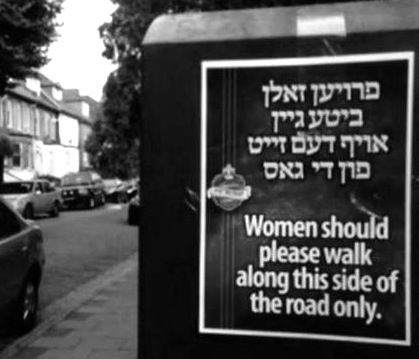 Glad to have cleared that up.

So according to Gomaa, Atheists got 56 problems but Allah ain’t one?

He’s got a point, though: from his perspective you have to be stupid to be an atheist in Egypt. After all, you can be jailed for that. Probably because the Grand Mufti believes that you hate god.

And Steve Neumann wants us to lay off these idiots?

Steve Neumann, in a Salon article, challenges all atheists to

refrain from posting disparaging commentary about Christian newsmakers on Facebook and other social media sites — including blogs — for one month.

Why? Because Neuman, himself an atheist, believes that atheists are too negative, and should refrain from ridiculing believers, lest they are offended and cast atheism in a bad light. As bad examples of too-aggressive atheists, Neumann cites Bill Maher, Sam Harris, and Richard Dawkins.

Which makes you wonder what Neumann is smoking. Maher’s one-liner ‘I don’t need a mandate – sounds gay to me’ exposes homophobia and political ignorance with just nine words better than the entirety of Neumann’s article.

The single biggest reason atheism exists is because religious exponents, based on their own misguided morality, try to force their worldview on others. Foremost on the mind of everyone this week are black-hooded religious monsters that kill, torture and mutilate for Allah. This is not the time to dial down the rhetoric.

Belief in false gods has real, tangible result for many. And it is the exponents of religion – those who are targeted by atheists – who contribute most to the problem. It’s called leverage – if you expose the stupidity of one leader, his followers may start to think. When Archbishop John Nienstedt preaches hate, it’s much better to attack and ridicule him than to try to point out his idiocy to each individual member of Nienstedt’s parish.

Plus, Maher is God.

Computer science knows a special case called ‘Short-Circuit evaluation’ that – despite its misleading name – allows computers to correctly evaluate an expression more quickly. For example, if you evaluate ‘a AND b’, you can stop evaluating if a is false; the whole expression will be false no matter what b evaluates to.

It seems the Archbishop of Canterbury, Justin Welby, has demonstrated another kind of logic that – since ‘short circuit’ is already taken – we should call ‘Crosswire Logic’: no matter what either side of the expression evaluates to, the result is always what you want.

Welby’s comment is strongly reminiscent of what the Swiss believe of their national hero and freedom fighter William (Wilhelm) Tell: They aren’t sure if he ever existed; it is a fact, however, that he killed Imperial Vogt Gessler.

It is usually either the last, slightly desparate argument – or one of the first; in a friendly discussion between believers and atheists it’s as sure to come as ‘amen’ at the end of a christian prayer:

… but there is so much good done in the name of religion.

What believers fail to understand is that to atheists, this is not an argument in favor religion. There are many reasons for that, but most muddle the issue. So let’s disregard the evil that is done in the name of religion, and forget the question whether the good outweighs the bad. Let’s simply look at the bright side of religion.

Fact is, there is a lot of good done in the name of God, Jesus, Allah, Vishnu and other gods, including Zeus and Athene. My hat is off to those who selflessly give; they are much better persons than I can ever hope to be and I shall not belittle their efforts.

But that’s not the point. What atheists argue is that it can’t be shown that these good deeds have been done on account of religion. A good case can be made that good people do good deeds, and that religion is not a necessary precondition. Looking closer, we might argue that while doing good, religious people waste a lot of ressources that could be much better employed: how many more people could be treated, how many more children educated if the money and effort spent to build temples, churches or other places of worship went into schools or hospitals instead? How much more could be done if the time spent on prayer was employed to till fields or heal illnesses?

Yes, a lot of good has been done in the name of religion. Only, it could have been so much more with less had religion not been involved.

US Presidential Wannabe Rick Santorum appeared on fundamentalist Christian TV yesterday to give his ideas of what he thinks are sane propositions once his party assumes power:

Freedom of religion is not freedom from religion

You know, strangely enough, it is. In unrelated news, one plus one equals two! Is America reverting to ‘W’-era stupidity? Can we expect Americans again to be proud of their ignorance, confidently holding up signs yelling “Get a brain! Morans”?

He then went on saying that removing the Bible from the classroom isn’t neutral, but the promotion of a different worldview. Yeah, like forcing a boxer to remove his knife before he enters the ring is promoting his opponent.

But Ricky didn’t leave it at that. Brace yourself, this one’s going to make you spell Moron with an ‘a’:

[They say that] the absence of religion is not a religion in itself – which it is!

Like being dead is a way to live or being bald is a hair color.

Rick: Unfortunately, the absence of intelligence is not a form of genius.

Well, you’ve got to hand it to Santorum. It’s 79 seconds of concentrated stupid, so dense that it’s on par with Archbishop John Nienstedt – and that guy is a pro!

Tennessee preacher Robby Gallaty has defended homophobia and discrimination against gays. Closing the gap to the Westboro Baptist Church (you know, the loonies that picket funerals holding up signs that say ‘God Hates Fags’), he also advocates killing homosexuals. His argument: being gay is a choice – perhaps similar to the fact that being a hate preacher is a choice.

But how does he know that? Has he decided to be attracted to women instead of men? Has he tried to be gay? It’s not as if this is difficult to understand. If he tried, he knew.

What is wrong with this guy that he not only worries about what other people do between the sheets, but also preaches against it?

Gallaty takes justification for his hate from the Bible, specifically the Old Testament (which, according to so many Christians isn’t in force anymore, because, you now, Jesus and stuff. Yeah, right), specifically Levicitus (a.k.a. third book of Moses).

Like this moral ass, I read the same book. Levicitus 20 indeed says what Robby Gallaty says it does. Yet, only a few lines further down it also says that people who are tattooed should be put to death. As should be people who wear garments made from two kinds of thread (the shirt he wears in the video looks like a cotton/synthetic mix to me…).

And of course, Levicitus is extremely clear on what to do with people who work on the sunday. Not just one, but three passages in just that section tell you that god wants you to kill them: “Bring them outside the camp, and stone them”. Guess on which day of the week Gallaty does most of his work.

If you wondered, Levicitus is also the part of the Bible that tells you that killing a couple of doves and sprinkling their blood about (plus some other hokus pokus) will cure Lepers. Yeah, that’s Levicitus. A great place to draw your inspiration from.

For the glory of God and the honor of God in your body, you may have to remain single for the rest of your life

Even a fool, when he holdeth his peace, is counted wise: and he that shutteth his lips is esteemed a man of understanding.

May I suggest that for the Glory of God and Humanity you STFU?