A believer once asked me why I was an atheist. He pointed out that it would be much easier to accept the love of god in my heart and live a life of contentment, knowing that I was going to be saved after I die.

He certainly has a point. Being an atheist isn’t easy. People are suspicious of you, assert that you have low moral standards, and seem compelled to bring up Hitler every other day. Your family is sometimes ostracized for not believing, and in some countries being an atheist can be dangerous, even lethal.

So why are we atheists?

We choose to be atheists. We choose to take responsibility for our actions, hold people accountable for what they do, and live our lives as ethical as possible.

My godson is pragmatic. His elder brother recently gave him the alarming news that there is no Santa Claus. This did cause him some distress. He worried that this year’s Christmas loot was going to be a lot smaller on account of there being no Santa.

He calmed down quickly, though.

In the end my godson doesn’t care if there is a Santa or not as long as he delivers the presents.

You know it’s going to be a great read if

“I know a women who was a virgin &birthed a child idiot. it can happen”

only made it to 24th place.

Oh, boy. Bishops and Stupid surely seem to go together like Nitro and Glycerine. The result is an equally explosive mix of hate and bigotry. After the Bishops of Limburg and the Twin Cities, Springfield Bishop Thomas John Paprocki has gone off the deep end.

In his frothing-at-the-mouth homily he exorcises the evils of same-sex marriage.

What is it with religious dimwits that keeps them up at night worrying about what other people are doing between the sheets?

What kind of neurosis compels someone to write the following dreck:

Indeed – and I’m not saying Paprocki is a professional liar and child molester.

On his way to orbit, already high as a kite, he mentions in an aside that, anyway, his homily is just a minor exorcism, not a major one. But just what’s the difference between a major and minor exorcism? It’s like differentiating between Bigfoot and and the Bogeyman. Seriously. What’s wrong with you, Bishop?

“Another major deception or distortion of marriage is the view that it is not ultimately about generating life, but rather is mainly about a romantic relationship designed for individual (not even mutual) fulfillment.”

Of course a catholic priest who can’t have sex nor marry would say something as stupid as that. Bishop: Sex is ultimately about generating life. Marriage is exclusively about social life.

But let’s be honest. Paprocki begins his homily by showing his hate credentials, trying in advance to shift the blame:

“It is not hateful to say that an immoral action is sinful.”

No. But it is hate to say that homosexuality is immoral. Nobody gives a rat’s ass about your concept of sin. Stop being a homophobic hate monger and start being a decent human.

I have some strange quirks. One of them is that, although not british, I like – and dare I say: comprehend – Monty Python. Not just ‘Life Of Brian’; to this day I can’t help but glance expectantly towards the door whenever I hear the words ‘Spanish Inquisition’.

Unfortunately, the world of humor is drifting perilously close to reality. For over a year now, Britain has a Minister of Faith. A few years ago I thought the Ministry of Silly Walks was a high point in comedy; now there is a Minister of Silly Thoughts.

Last week, the Minister, Baroness Warsi, on the subject of Islam extremism treated the british Parliament to quote from The West Wing, following it up with a particularly thin version of the No True Scotsman argument.

This has led me to believe (ha!) that the Baroness is now the prime candidate for the soon-to-be-formed Ministry of Silly Talks.

US comedian Rodney Dangerfield had a routine where he told outlandish stories that invariably ended with his catch-phrase: ‘just can’t get no respect.’

Religion, it seems, has the same problem: it tells outlandish stories that get no respect. At least that’s what I’m reminded of whenever someone tells me that religion should be more respected, or that I, in particular, should pay more respect to religion. Why do believers assert that religion is entitled to deep respect, or that we should respect people simply for being pious?

I think that it is natural not to respect religions:

It has to be earned.

In the 12th century the Northmen (also called Danes or Vikings) took to the sea and plundered all over Europe. In England and France, some monarchs thought it prudent to pay a tribute instead of being plundered. This tribute was called Danegeld. Needless to say, it didn’t work well, and only served to prolong the problem. In the end, they had to fight a larger, vastly richer, better equipped, and deadlier enemy.

Today the press censors itself in the hopes of not arousing the ire of muslims. People are denied freedom of speech for the same reason. Governments look the other way when religious people ignore human rights and shadow law is practiced. Those responsible once again believe that they are being prudent, that they are taking the safe approach.

Instead of drawing a line in the sand, they try to placate the barbarians at the gate. This will not work. Whenever governments curtail fundamental rights in the ‘interest’ of peace with an aggressive, hostile, morally retarded religion, they are repeating past mistakes.

They are paying religious Danegeld.

“It’s always depressing and sobering when our extremists prove to be as ridiculous as their extremists.”

Actually, no. It confirms what we already suspect: they all suffer the same delusion. They are all the same.

In a way, that’s not depressing – it’s reassuring.

The Catholic organization “Rosaries For Life” has been charitable:

The Catholic Bishops Conference of the Philippines (CBCP) said the prolife movement, Rosaries for Life, sent an initial 3,000 rosaries “to fill the spiritual necessities” of those affected by the killer typhoon in Tacloban City.

How kind. Now the victims can thank God.

No word on what for.

But if you have been without water and food for two weeks, and the rosary in your care pack has replaced the water purification pills, you can probably thank him for sending you an implement to strangle someone.

If you want to help, send money.

Some believers argue that religion is far superior to a rational worldview. Science, they say, has repeatedly admitted to being wrong, while religious values and morals have always stayed the same. 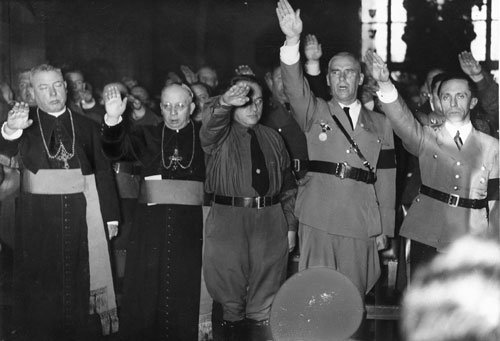 Is that really a good thing?